Susan Dinan, my incomparable wife, is currently away at a conference in Cambridge, Massachusetts. Although she is having a marvelous time, she has left me alone with the garden. In her absence, our kale crop has gotten out of control. It is frightening. It is frightening. Plainly my wife, who is vegan, has unbeknownst to me, been nibbling away at the kale, and has been keeping it in bounds. In her absence, the kale aboundeth! And so I must go forth and battle the kale lest it takeover the yard.

Kale is one of those foods that has been quite popular over the last decade (although there are signs that this is waning). The biggest problem, I find, is that I am often served woody kale. Kale, in point of fact, does need to be handled aggressively if it is going to be served in a salad. The preparation I am doing today is the most basic way of handling mature kale. Do keep in mind that this approach is inappropriate for baby kale, or a softer kale, such as lacinato (dinosaur) kale.

The key to making mature kale edible is that the stems must absolutely be cut out of the leaf (not, as is the case with Trader Joe’s kale mix, left in).

The resulting leaf strips then should be stacked and rolled into a kind of cigar roll. 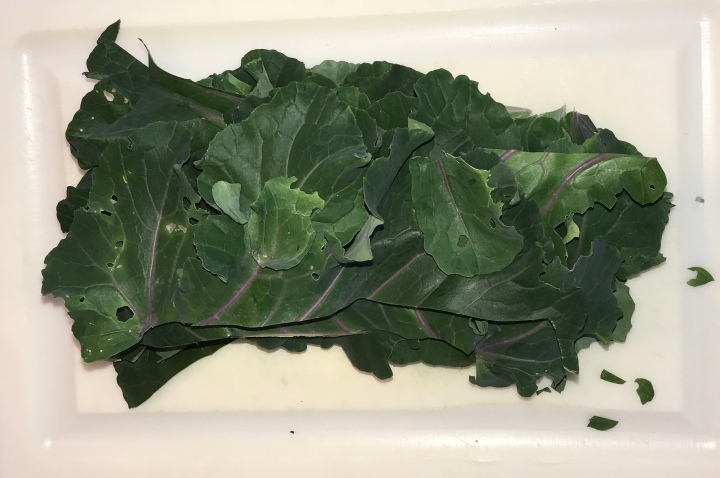 The appropriate technique here is to use a sharp chef’s knife to shave the kale role into slender ribbons.

I then placed these ribbons in a bowl. Incidentally, this kale chiffonade could easily be deployed to make a great pasta sauce (saute garlic and olive oil, add the kale, then add some acid, such a red wine vinegar, pasta water, and then pasta), added to a smoothie, or a hundred other applications.

Our intentions, however, are to render this kale into a salad. The simplest approach is to get about a half a teaspoon of salt and to massage it into the kale.

The massaging action, along with the salt, helps to break down the kale. To this, I added the juice from half of a lemon (acid further processes the kale). At this point I simply left the room, leaving the kale to process in the salt-lemon mixture. When I returned about 15 minutes later, I dressed the kale mix with about a tbsp of olive oil. I also added half of an avocado in slices to the salad. And it was delicious.

Delicious enough that I ate it before I could think to photograph it.

This is a text widget, which allows you to add text or HTML to your sidebar. You can use them to display text, links, images, HTML, or a combination of these. Edit them in the Widget section of the Customizer.